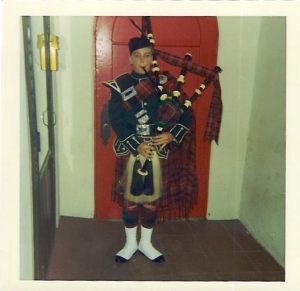 Back in January, 1968 when I was 12 years old, I had been playing pipes for more than a year and a half. The Walter B. Truman Bagpipe Band in Santa Barbara, California had given me free lessons beginning in the summer of ’66 and I’d been play gigs with them for six months.

When I got home that night I told my mom, “Guess what? I’m going to pipe in the big cheese!” Now, mom had come from Scotland in 1948 and had lost some of her accent but never had a good command of American idioms. When she called her best friend, Willa to tell her the great news, mom said, “Och, wee Freddy’ll be pipin’ in a GREAT BIG CHEESE!” Willa replied, “That’s all I can take! I’ll attend the supper, but after that, I’ll be quittin’ the society. Who ever heard of such a thing, a cheese at a Burns Night? Will there no be a haggis?” Of course, everyone had a good laugh when the misunderstanding was cleared up. My dad, who grew up in Texas said, “Good thing you didn’t tell her you were piping in the “head enchilada!”