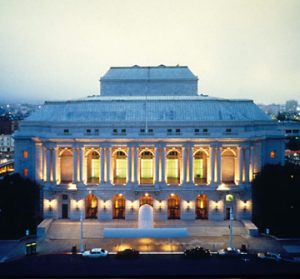 Back in July of 2011, I got a call from the orchestra director of the San Francisco Opera. A good friend of mine, a piper was seriously ill and not able to perform the bagpipe part in the world premiere of Heart of a Soldier at the War Memorial Opera House in September. The director said my friend had referred him to me and asked if I could play a bagpipe part with the orchestra. I could hardly believe what I was hearing! I was hired without an audition to play 4 rehearsals and 7 performances in September. What an amazing honor. In a few days I had signed the contract and was reviewing the music, written specifically for the bagpipe. No adaptation or fancy fingering needed.

I did not have to dress in uniform, just dark clothing, the semi-official “uniform” of the opera’s orchestra. I was introduced around, welcomed in by the other orchestra members as if I were family, given the run of the place, an official ID card, and given the Cook’s tour. I swear to you I was pinching myself continually for a month.

Going to work twice a week was a proverbial piece of cake. Dress in black shirt, pants, and shoes, take the BART train to within three blocks of the opera house, and walk in the back stage entrance. I explored every inch of the place, feeling like the phantom of the opera. I fantasized about hiding until closing time and spending the night inside. 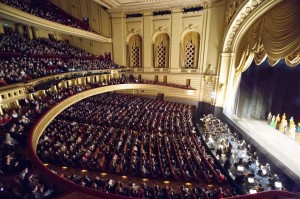 I played my part from the organ bay, directed by a young assistant director who raced into the room about a minute in advance, set the tempo and off we went. I did a fade-out by striding quickly down a corridor behind the organ bay as the poor director ran backwards in front of me. He never tripped. Good thing too. It would have been a trick not to walk on him.

Heart of a Soldier is the story of Rick  Rescorla, who saw D-day troops embark in Cornwall as a child, fought in Rhodesia and Vietnam, then became the head of security for Morgan Stanley at the World Trade Center. He warned of the danger of terrorist attack but was ignored. He died in the building collapse doing one last check after seeing all of about 3,000 Morgan Stanley employees to safety. The bagpipe part was at the very end of the story after his death. My notes were just about the last sounds heard before the curtain dropped.

The day I walked out of there for the last time was bittersweet. I still feel a deep sense of privilege for that experience. Thank you, Tracy Davis, orchestra director for hiring and supporting such an inexperienced opera musician. Thank you Wendy Young, for referring me. It was one of the great joys of my life.